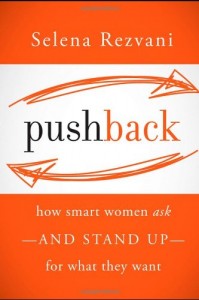 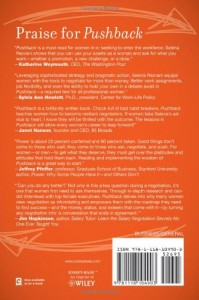 In Pushback, top leadership consultant Selena Rezvani argues that self-advocacy is critical to success. Yet women initiate negotiations four times less often than men, resulting in getting less of what they want—promotion opportunities, plum assignments, and higher pay. This book shines a light on the real rules of holding your own and pushing back for what is rightfully yours. Drawing on interviews with high-level leaders, Rezvani offers readers in the first half of their career the unedited truth about how women have asked their way to the top and triumphed—and how you can too.

Insightful and accessible, Pushback is a timely resource for savvy women who want to leverage their skills, promote themselves effectively, and fast track their careers.

Q & A with Selena Rezvani, author of Pushback

Why a book on negotiating--for women? As a writer, there are books you want to write and then books you need to write. Pushback certainly falls into the latter category. As a group, we as women negotiate four times less often than our male counterparts, resulting in getting less of what we want and need: financial security, career advancement, even control over our lifestyles. In my roles as a workplace consultant, a women's leadership columnist, and a recovering "negotiation avoider" myself, I've witnessed countless women continue to sidestep negotiating, choosing instead to live with an inconvenient or less than optimal situation. This matters because research shows that women are happiest between the ages of 18 to 25 and after age 50--that is when, for many, converging life demands like kids and work are less pronounced. Being fulfilled and happy during our most productive time in our professional lives often require us to invent new, better terms and to get "yes" decisions from others. In Pushback, I argue that if women negotiate for better conditions, they will see leaps in their confidence, happiness, and life circumstances. You interviewed 20 female executives as the basis for your research. What about these interviews surprised you? What surprised me most was the participants' response when I asked them to quantify the impact of pushing back. I asked interviewees, "Assuming a woman's career success equals 100 percent, what percentage is accounted for by her effectiveness in negotiating and pushing back?" Averaging the twenty responses I heard, the answer was 60 percent; that's to say that 60 percent of a woman's career success hinges on her pushback skills--holding her own, advocating her needs, and negotiating. Although technical skills, academic or business pedigree, and people skills emerged as necessities for those who want to lead, command of your own voice and ability to advocate, according to successful women executives, ranked higher. I didn’t expect the response to be quite that affirmative. Pushback could be interpreted as a combative--even negative--term. How do you define it? The word is definitely more commonly used to mean resistance, but I am using it rather more broadly--and more positively. In the context of this book and the interviews I conducted, pushback represents the group of skills that allow us to take a stand, be firm, or advocate on our own behalf. It also encompasses our adeptness at advancing a cause, making a request, and persuading others of the merits of our view. We can use it to go after what we want, and we can use it to defend what is ours and what we need. You say that, financially speaking, women's propensity to avoid negotiating "devastates their potential." What are the effects you've observed? When we don't negotiate our salaries, we leave thousands, even millions, of dollars on the table unclaimed. This not only affects us negatively right now, but drastically dwarfs the retirement savings we work so hard to accumulate. Nationally, women do not yet earn comparable wages to men--and then add to that that we are more likely to leave the paid workforce to manage caretaking responsibilities. With nearly half of all marriages ending in divorce, our own share of earnings becomes even more of an important lifeline. Women may also have a tendency to let males take care of bills and savings and yet we live longer than men, which means in the end, we are the ones literally left holding the purse. When we're not the chief negotiator of our own finances and lives, our economic stability and vitality is greatly endangered. In a recession, is it still possible to negotiate on the job? Workplace negotiations, even today, represent some of the most lush and productive places for negotiating, not to mention the most materially significant. I'm not just referring to salary requests, but negotiations about flexible arrangements, maternity leave plans, part-time work schedules--even which work assignments we take on or lead. Many companies are perfectly willing to make case-by-case determinations about money, roles, or career paths and there's less of a trend today requiring that all employees conform to one strict hierarchy or career ladder. As I teach readers in Pushback, it's up to each of us to do our homework, make an irrefutable case, and then persuade our counterpart so that it's very hard for them to say "no." Do the youngest working women--Gen Y'ers--require negotiation skills? Yes, and perhaps even more so than older generations. When queried, Gen Y women report that, (1) their most closely held value is independence and that, (2) their primary career goal is entrepreneurship. This suggests that those young women who do join the traditional workforce will expect control over how and what they do. What's more, they're looking for hybrid career opportunities--ones that allow them to cross-pollinate their work and outside interests and personal and professional lives. The skills of negotiating and self advocacy will therefore be career necessities in a work world that's still fairly rigid, where young women want choice and diversity in their work. Do you think there’s a formula for learning to negotiate well? I do. In Pushback, I present a complete process for negotiation--not just as a one-time transaction, but as an everyday skill. The system I've developed over the last several years teaches women four critical, repeatable steps for negotiating with finesse. It works incredibly well. Women who learn and practice these negotiation tactics benefit financially, find solutions and opportunities where there were previously none, and often get more of what they wanted than they originally asked for. One woman I heard from informed me that after negotiating her role at a dead-end job, her employer asked her to write her dream description, noting that they'd bend over backward to keep her. These kinds of stories abound when women prepare for a request and make the "ask." By setting our sights high, we can challenge the syndrome that leaves so many people ailing from uncontested, low expectations.