Cart: 0 item(s) 0.00
Total: 0.00
Checkout
Your shopping cart is empty!
Books » Play Like a Man, Win Like a Woman: What Men Know About Success that Women Need to Learn 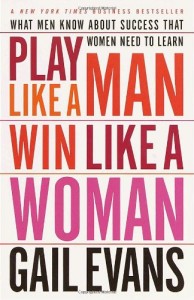 A major reason for this? Most women were never taught how to play the game of business.

Throughout her career in the supercompetitive, male-dominated media industry, Gail Evans, one of the country's most powerful executives, has met innumerable women who tell her that they feel lost in the workplace, almost as if they were playing a game without knowing the directions.

She tells them that's exactly the case: Business is indeed a game, and like any game, there are rules to playing well. For the most part, Gail has discovered, women don't know them.

Men know these rules because they wrote them, but women often feel shut out of the process because they don't know when to speak up, when to ask for responsibility, what to say at an interview, and a lot of other key moves that can make or break a career.

Now, in her book Play Like a Man, Win Like a Woman, Gail Evans reveals the secrets to the playbook of success and teaches women at all levels of the organization--from assistant to vice president--how to play the game of business to their advantage.

Sharing with humor and candor her years of lessons from corporate life, Gail Evans gives readers practical tools for making the right decisions at work. Among the rules you will learn are:

• How to Keep Score at Work
• When to Take a Risk
• How to Deal with the Imposter Syndrome
• Ten Vocabulary Words That Mean Different Things to Men and Women
• Why Men Can be Ugly, and You Can't
• When to Quit Your Job

Evans is not saying that every woman has to play exactly by men's rules--not at all. Women bring many inherent traits to the workplace that can provide them with a potential advantage over men, such as a woman's ability to form relationships, or her intuition. But women do need to know the basic rules so that they can understand the full consequences of their every action and how it makes an impact on their career.

An honest and practical handbook that reveals important insights into relationships between men and women and work, Play Like a Man, Win Like a Woman, is a must-read for every woman who wants to leverage her power in the workplace.
The fact that there are few women occupying top-level positions in corporate America has, for a long time, been blamed on a ubiquitous "glass ceiling." But according to Gail Evans, this is a tired myth implying a woman is a "person-who's-done-to instead of a person-who's-doing." In Play Like a Man, Win Like a Woman, CNN's ebullient--and successful--executive vice president puts forth a new thesis: women are not in star positions because they haven't yet learned how to play the game.

The game of business is played on a field where males have been comfortable since they were very young, says Evans. It's a game where winning is the obvious (and only) objective and where aggression, self-promotion, a tough skin, and an effective display of power are the signs of a winner. Women, on the other hand, enter the game disadvantaged, having been taught to be cooperative rather than competitive, to enjoy the process rather than simply the result, and to seek approval rather than assume success. In her entertaining, informative, and practical book, Evans sets out to level the playing field by providing instructions on how men play and by teaching women to play smarter and win on their own terms. In one section, where she offers such advice as "Toot Your Own Horn," "Accept Uncertainty," and "Be an Imposter," Evans presents a common business scenario. She shows the typical male and female responses to it, analyzes the problem with the woman's reaction, and offers advice on what to do differently. Writing in light, accessible prose, Evans supports her observations with both personal and professional anecdotes and covers the gamut of women's experiences on the corporate path. Evans's message is inspiring: women can learn to play the game as well as any man and bring with them a unique set of skills and experiences.

It's impossible to ignore a woman who has reached the top of her profession in a tough business and is still prepared to claim that "everything I ever needed to know about business I learned driving the car pool." --S. Ketchum