Cart: 0 item(s) 0.00
Total: 0.00
Checkout
Your shopping cart is empty!
Books » Zuppe: Soups from the Kitchen of the American Academy in Rome, The Rome Sustainable Food Project 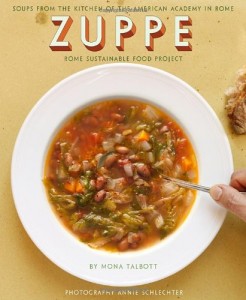 Much more than a collection of remarkable soups, Mona Talbott’s Zuppe is also a wise and gentle tutorial on the “the beauty and delicious rewards of frugality” and how the humblest foods can be the most profoundly satisfying. In addition to 50 recipes, Talbott shares approaches and techniques that can change the way a cook thinks about economy, improvisation, and using all the flavors and nutrients inherent in each ingredient.

A Chez Panisse graduate, Talbott was chosen by Alice Waters to be Executive Chef of the innovative Rome Sustainable Food Project at the American Academy in Rome. There, while cooking for the Academy’s creative community of scholars, historians, artists, archaeologists, and architects, Talbott perfected a repertoire of dishes made from local, seasonal, organic ingredients. Central to the menu are soups.

Inspired by the traditions of cucina povera, the so-called “cuisine of the poor” that has been the source of so many brilliant Italian dishes, Talbott’s recipes waste nothing, employ the concept of arrangiarsi (“making do”), and skillfully transform leftovers. And, in another nod to the wisdom and economy of traditional kitchens, she also points out which soups can easily be made into one-dish meals with the addition of a single ingredient such as a poached egg, a piece of grilled toast, or even clams.

Organized seasonally, Zuppe also serves as a practical guide to using the bounty of farmers markets throughout the year.