Cart: 0 item(s) 0.00
Total: 0.00
Checkout
Your shopping cart is empty!
Books » Down Home with the Neelys: A Southern Family Cookbook 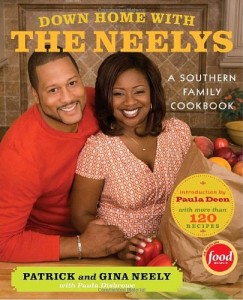 
The Neelys’ down-home approach to cooking has earned them the highest accolades from coast to coast. It has also won them millions of viewers on the Food Network. Simply put, the Neelys are all about good food and good times. In this, their eagerly awaited debut cookbook, the Neelys share the delicious food they have been cooking up for years both at home and in their restaurants.

Pat and Gina hail from families with a boundless love of cooking and bedrock traditions of sharing meals. At the Neelys’, mealtime is family time, and that means no stinting on “the sauce.” Indeed, that’s one of the Neely secrets: the liberal application of barbeque sauce to almost anything—spaghetti, nachos, salad, you name it. Of course, there are other secrets as well, and you will find them all in the pages of Down Home with the Neelys, along with more than 120 mouthwatering recipes.

Here are the tried-and-true southern recipes that have been passed down from one Neely generation to the next, including many of their signature dishes, such as Barbeque Deviled Eggs, Florida Coast Pickled Shrimp, Pat’s Wings of Fire, Gina’s Collard Greens, Grandma Jean’s Potato Salad, Nana’s Southern Gumbo, Memphis-sized Pulled Pork Sandwiches with Slaw, Get Yo’ Man Chicken, and Sock-It-to-Me Cake. Certainly, no self-respecting southerner would dream of offering a meal to a guest without a proper drink, so Pat and Gina have included some of their favorite libations here, too.

The Neelys work, laugh, love, and play harder than any family you’ll ever meet. Their love for good food is infectious, and in Down Home with the Neelys, they bring their heavenly inspired cooking down to earth for all to share.

From Down Home with the Neelys: Sweet and Spicy Slaw 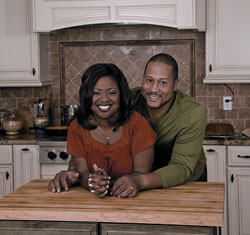 Pat: In Memphis, if you run a barbecue joint, you better have coleslaw on your menu and it better be good (ours is some of the very best). Indeed, you could spend a day in Memphis tasting slaw from rib joints all over town. And yet there are people who visit our fair city who are hesitant to try it, especially folks from the West Coast. This is a mystery to me. Coleslaw and pulled pork go together like lettuce and tomatoes on a burger, and salted peanuts in a bottle of pop (I bet some of you haven’t tried that, either).


Bottom line: You come down Memphis way, you have to try our slaw. When we started Neely’s, Tony and I recognized the importance of slaw and knew we would have to come up with a killer recipe, one that would complement our sandwiches and our sauce. It had to be sweet yet spicy, because our barbecue sauce was truly mild. We also wanted it to be coarse and fresh (with a little onion flavor, and carrots for color). A big key for us was using two types of pepper, black and cayenne, which work together as well as Tony and I do. Then came some sugar, as sweet as my Gina. All of these ingredients have given us a coleslaw we are very proud of. For years in the restaurant this was my dish—no one made it for either location but me. I didn’t use measuring cups; everything was done by feel. As we grew, I knew I would eventually have to develop it into a standard recipe so others could make it. Now we have customers who come in and buy slaw by the bucket to take home and have with their catfish, spaghetti, or whatever they are cooking. This recipe will convert even those West Coast hard-liners who claim they “don’t eat slaw.”

Gina: On our show, we like to tease that Pat is the sweet and I am the spicy (only my man knows for sure!). At Neely’s restaurants, the famous and addictive coleslaw happens to be both. We often double this recipe for parties, because leftovers are so delicious (and a food processor makes quick work of all that shredding). When making this slaw at home, it’s a good idea to use both red and green cabbage. It’ll give your slaw more color. Be sure to select the freshest, best-looking cabbage available for the prettiest, crispest, and crunchiest coleslaw you have ever tasted. 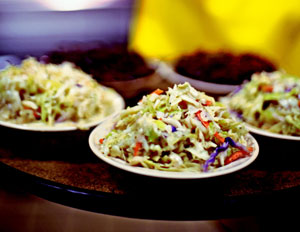 Cut the cabbages into quarters and remove the cores. Peel the carrots and onion, and slice them into pieces that will fit through the feed tube of a food processor. Fit the food processor with the large-holed grater attachment, and push the cabbage, carrots, and onion through the feed tube to grate. In a large bowl, toss the grated cabbage, carrots, and onions to combine.

In a medium bowl, whisk together the mayonnaise, mustard, vinegar, sugar, black pepper, and cayenne (whisk until the sugar is dissolved). Toss the dressing with the coleslaw, and season with salt and additional pepper to taste. Cover the slaw with plastic wrap, and chill for at least 2 hours before serving.