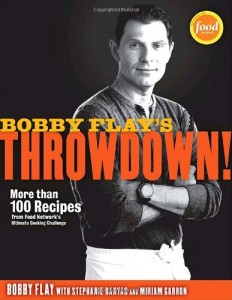 Every week on Throwdown!, celebrity chef and restaurateur Bobby Flay goes head-to-head with cooks who have staked their claim as masters of an iconic dish—buffalo wings, chicken cacciatore, or sticky buns, for example—even though he may never have cooked these things before. The results are always entertaining—and delicious. In his first-ever cookbook collaboration with Food Network, Bobby shares the recipes and fun from his popular show.

For each episode, both Bobby’s recipe and his challenger’s are included, comprising a cross-country tour of regional specialties and good-hearted competitive spirit. Travel to San Antonio for puffy tacos, Philadelphia for cheesesteaks, Harlem for fried chicken and waffles, and Charleston for coconut cake. Try both dishes to pick your favorite, or challenge friends and family to a battle of your own. Either way, you’ll find tons of fantastic flavors in this best-of-the-best book from the first seven seasons of Throwdown!.

The ultimate companion cookbook to one of America’s favorite food shows, Bobby Flay’s Throwdown! lets home cooks and fans in on the action, featuring favorite Throwdown! moments and behind-the-scenes peeks alongside beautiful, all-new color food photography created just for this book. So if Bobby Flay ever strolls into your backyard asking “Are you ready for a Throwdown?” you definitely will be!
Fall into Cooking Featured Recipes from Bobby Flay’s Throwdown!: Pumpkin Pie

To make the cinnamon crunch, preheat the oven to 350ºF.

Combine the flour, oats, muscovado sugar, and cinnamon in a food processor, and process a few times to combine. Add the butter and pulse until combined. Pat the mixture evenly into a 4-inch square on a parchment-lined baking sheet. Bake until golden brown and crisp, about 15 minutes. Remove and let cool. Transfer to a cutting board and chop into small pieces. Keep the oven on.

To make the crust, combine the graham cracker crumbs, butter, and cinnamon in a bowl and mix until combined. Press evenly onto the bottom and sides of a 10-inch pie plate. Brush with the beaten egg. Bake until light golden brown and firm, about 12 minutes. Remove from the oven and let cool on a wire rack.

Reduce the oven temperature to 300ºF.

To make the filling, whisk the eggs, egg yolks, both sugars, and the molasses together in a medium bowl. Mix in the pumpkin puree, cinnamon, ginger, nutmeg, cloves, and salt. Whisk in the heavy cream, milk, and vanilla seeds or extract. Strain the mixture through a coarse strainer into a bowl. Whisk in the butter.

Place the pie plate on a baking sheet, pour the pumpkin mixture into the shell, and sprinkle additional cinnamon over the top. Bake until the filling is set around edges but the center still jiggles slightly when shaken, 45 to 60 minutes. Transfer to a wire rack and cool to room temperature, about 2 hours.

Cut the pie into slices and top each with a large dollop of whipped cream and some of the cinnamon crunch.


Combine the cream, vanilla seeds, maple syrup, and bourbon in a large chilled bowl, and whip until soft peaks form.


To make the crust, combine the flour and salt in a medium bowl and mix well. Break up the shortening and toss it with the flour mixture to coat. Using a pastry blender or your fingertips, mix the ingredients together until the dough forms coarse crumbs. Add 3 to 4 tablespoons ice-cold water, 1 tablespoon at a time, until the dough easily forms a ball that can hold itself together. Cover in plastic wrap and refrigerate for at least 30 minutes and as long as overnight.

While the dough is resting, make the streusel: Toss the pecans with the brown sugar, flour, and cinnamon in a medium bowl. Add the butter, and using a pastry blender or your fingertips, work in until you have small clumps. Set aside.

Sprinkle flour generously over a hard surface and roll the dough out with a rolling pin until it forms an 11-inch round. Fold the round in half, place it in a 9-inch pie plate, and then unfold the dough to completely cover the pie plate with a bit of an overhang. Tuck the overhang under to make a double-thick rim, and then use your fingers to crimp the edges of the pie shell. Brush the heavy cream over the crimped edges, and refrigerate until the filling is complete.

To make the filling, mix the pumpkin, flour, brown sugar, nutmeg, cinnamon, and salt together with an electric mixer on medium speed until smooth, scraping the sides of the bowl well. Add the heavy cream and maple syrup, scraping the bowl several times while mixing. Mix in the beaten eggs.

Cool the pie on a wire rack. The pie is best served at either at room temperature or cold. Before serving, garnish the pie with the Maple Whipped Cream.

Place the metal bowl of an electric mixer in the freezer to chill for at least 15 minutes.